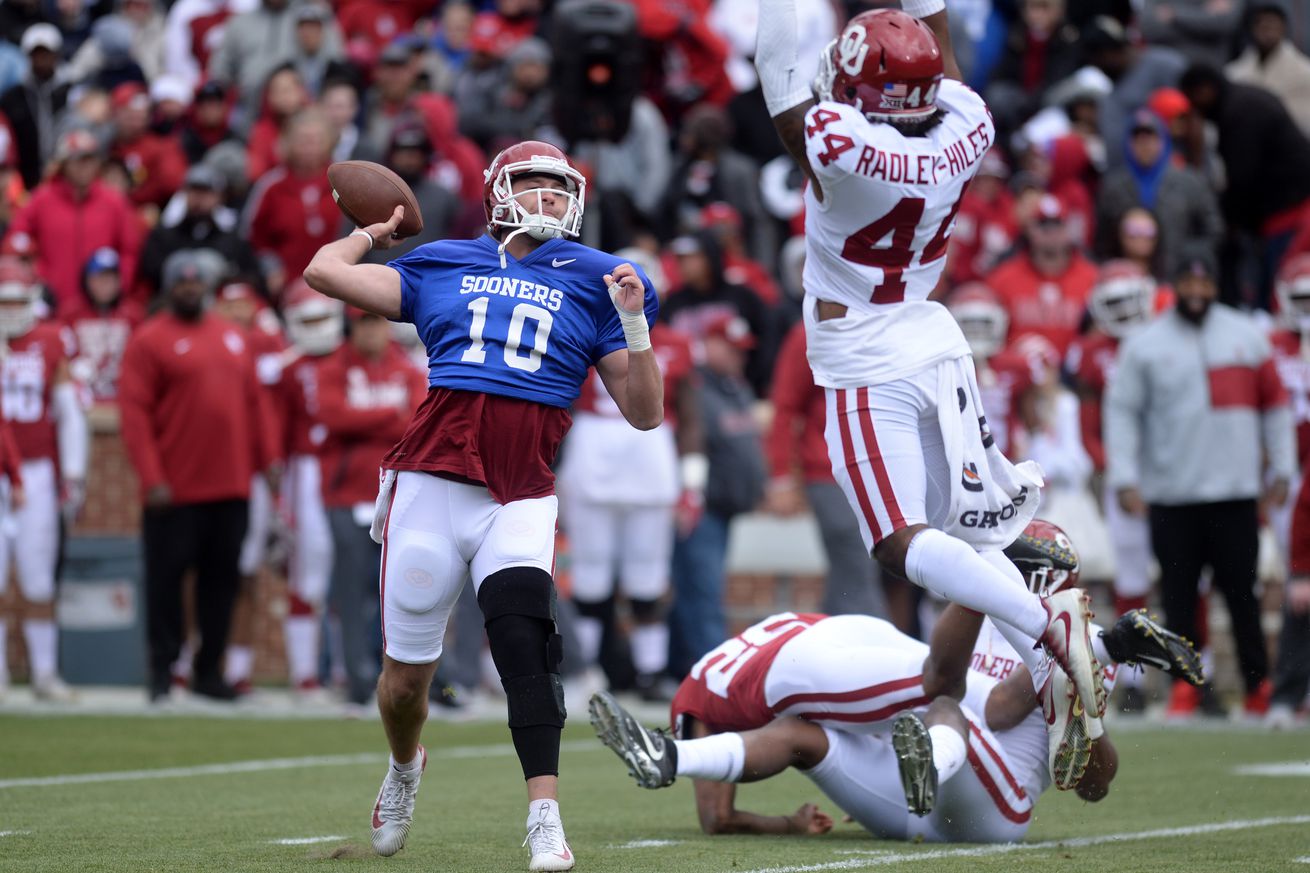 Bookie shows maturity beyond his years while also allowing for a bit more flexibility as far a scheme is concerned.

With spring practice in the books for the Oklahoma Sooners, it’ll be months before the team returns to the gridiron in any formal capacity. In the meantime, there’s something you need to prepare yourself for once football returns, and that’s seeing a whole lot more of No. 44.

Brendan Radley-Hiles, better known by his nickname “Bookie”, is only a true freshman, but he’s already one of the most popular players on the team. If you asked anybody who’s met him, they’d tell you it’s his personality that wins people over. He’s a leader, and he’s genuine, and if you haven’t figured it out yet, he’s a budding superstar on the field.

In high school, Radley-Hiles was about as elite of a recruit as they come. 247Composite rating of .9807, making him the 38th highest rated recruit of the 2018 class. Rivals ranked Bookie even higher than that — 17th overall in the nation to be exact, and the No. 2 cornerback in the class. Bookie was originally committed to Nebraska, but after visiting Norman with IMG teammate TJ Pledger in late October, he knew he wanted to be a Sooner and made the official announcement at January’s Army All-American Bowl.

After enrolling early, the buzz around Bookie has picked up substantially. Since the beginning of spring practice, Bookie has made all kinds of plays on defense and has drawn praise from his coaches and teammates. On Saturday, the do-it-all defensive back out of IMG Academy gave OU fans a taste of what he brings to the defense.

First look at Bookie in coverage during the first half. #Sooners pic.twitter.com/4CW38pEdJp

Now that’s not something you see from the average true freshman DB. Good thing Bookie isn’t average. At the game, as I watched down after down, I couldn’t help but notice how Bookie seemed in-tune with his man on the other side, like he knew what they were thinking. If the QB was rolling out, Bookie stayed true to his assignment and didn’t run himself out of position. If the QB tucked the ball and made a run for it, Bookie was right there step for step. The breaks he made were quick, and if he was ever out of position (which he rarely was), he recovered quickly, too.

Bookie also showed a bit of discipline in the open field on Saturday, and it’s clear he understands how to handle the situation. On this play, RB Kennedy Brooks was rushing past the second level of the defense, and Bookie exhibited pretty solid tackling fundamentals. Once he found his position, he angled himself so that he could wrap up Brooks from the side instead of going at him straight up. Bookie also could’ve easily gone for the big hit, but he knew that patience was the key to keeping Kennedy for taking this for a huge gain, showing maturity beyond his years.

It’s not always about size and speed in the game of football — even though Bookie has plenty of the latter. Fundamentals go a long way, and his game is absolutely a testament to that. It’s easy to see how he can become a leader for this team by how he plays.

Because Radley-Hiles’ game is so unique, it’s not easy making comparisons to just one player. Bookie once described himself as a “controlled, sneaky savage.” Over the years, Bookie has modeled his game after DB greats like Tyrann Mathieu, Joe Haden, Jason Verrett and the late Sean Taylor. After everything I’ve heard and seen Radley-Hiles do, it’s evident he has all the tools to become one of the greats.

And sure, his measurables don’t immediately jump off the page, but seeing him in person completely removed any concerns I might’ve had if I had never known about him before. What Bookie lacks in height he more than makes up for with instincts. His football I.Q. is as advanced as it could be for someone who should still be in high school. Defensive backs coach Kerry Cooks has raved about Bookie, saying “He’s probably on the level of a third year player, at least just with understanding the game”. Being coachable is half the battle for any player, and when you’re as talented and as coachable as Bookie is, the sky’s the limit.

As far as Bookie’s impact on the Sooners’ defensive scheme is concerned, I think his versatility and ability could allow Oklahoma to play in a 4-2-5 look with more frequency on any given Saturday. Especially in the pass-heavy Big 12, utilizing five DBs (Bookie as the nickel, plus two corners and two safeties) and a four-man front could be the answer for generating more stops and producing more turnovers. The presence of a guy like Bookie could have a cascading effect on the defense as a whole, too. If Bookie and the rest of the secondary start to become a problem for opposing QBs and receivers, that should allow the front six or seven to apply pressure, leading to more tackles at the line of scrimmage or in the backfield. Also, expect to see the quick DB rushing the passer on a number of occasions this fall.

Bookie appears destined for the nickel role (while also getting safety snaps in the 3-4), but whether he is contributing at nickel, safety or cornerback come this fall, it’s probably a safe bet that the talented playmaker will be wreaking havoc in Oklahoma’s secondary for years to come. I truly believe this guy has First Team All-Conference potential and could have a Tyrann “Honey Badger” Matheiu type of impact. Like I said, you better get used to hearing his name and seeing his game, because the Bookie Era is here, and he’s only getting better. Book it.

The Bookie Era has begun. #Sooners

Send us in GIF form your feelings toward the new tailgating guidelines in Norman for home football games.

That time Marvin Mims took over the game.

No big deal, just hanging in McCasland Fieldhouse with @OU_Volleyball during The Plank Show.

Thanks to Lindsey Gray-Walton and Kyle Walton for joining @PlankShow to kickoff today’s fun! pic.twitter.com/ikMr…

Several true freshman have the chance the contribute this season for OU.

Bob Stoops was asked if there’s a particular position he’d worry about playing a true freshman. He answered with The Rush w/ @TedLehman11 and @Tyler_McComas pic.twitter.com/SaC0…

18 days until kickoff in Norman.

Bob Stoops had 18 incredible seasons as head coach at OU.