Pole vault was not the first thing on Norman High senior Chandler Branum’s athletic radar. That would have been gymnastics, which she competed in from the time she was three years old up until middle school.

Still, there was Branum tweeting out on Dec. 1 that she was verbally committing as a preferred walk-on to the University of Oklahoma track and field program and continuing her vaulting career. For those that know Branum, it’s probably no surprise that she chose walk-on status at OU over an immediate scholarship offer from a smaller school.

Excited to announce that I have verbally committed to the University of Oklahoma and will be continuing my vaulting career. So blessed to have received this opportunity ☝❤️ pic.twitter.com/9CjJqi6jNl

The first reason is obvious. She loves the university.

“I would have opportunities to vault at smaller schools if I wanted to, but the campus at OU, the atmosphere, the football team and living in Norman is something that I’ve always pictured myself doing,” Branum said.

The second reason is a little more complex. She’s naturally self-driven and wildly competitive. When the time commitment of gymnastics became too much to handle, she still had to find something.

“I tried every single sport that I could, because I’d been so used to doing sports and competing my whole life. Not doing sports wasn’t an option,” Branum said.

So, she tried volleyball and cross country. Eventually, she went out for track her eighth grade year with the intention of running sprints and having something fun to do with her friends. What happened next was the last thing she expected.

Norman High pole vault coach Wes Barnhart saw her potential in the pole vault because of her upper body strength and the fact that gymnasts often make good vaulters.

“He asked me to try it out and I just fell in love with it from there,” Branum said.

She had to work at it, though.

“Basically, I started from ground zero. I knew nothing about pole vault. I had never even really watched it up until my eighth grade year. Coach Barnhart could see the potential in me, so he worked really hard with me on drill after drill and got it into my head,” Branum said. “Once I learned how to run and plant the pole, kind of turning upside down—we call it inverting in pole vaulting—it’s always been something that’s come naturally to me to be upside down. It’s something that I thought was really enjoyable.”

“I looked up to her so much. She inspired me to really try to vault at the next level. One day I sat down with myself and said, ‘I want to be like her and I want to be driven and hard-working. I really want to push myself to do this at the next level.’ Her being there as a role model for me played a big role even though we only got to jump together for a year,” Branum said.

For Branum, that meant joining Norman Strength for personal training sessions with head coach Jeremy Rutledge to increase leg strength. After Rutledge’s recommendation, she tried out a CrossFit class as well.

“I never expected to fall in love with working out or lifting weights, but it’s helped so much with my power in my run, my diet, my endurance and I’m such a better overall athlete now. It’s really helped with every aspect of the vault,” Branum said. 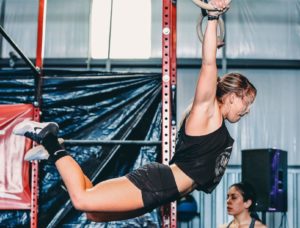 In fact, she fell so much in love with CrossFit that she qualified and competed in the teenage division regional CrossFit games this past year. All of the hard work through CrossFit on improving her body and learning a correct run is what led her to a state runner-up finish in the pole vault last spring.

She has her eyes set on vaulting past one of Hanks’ records during her final high school season: Hanks’ twelve foot vault. That’s the NHS school record. Branum’s personal record is 11 feet, four inches.

“That’ll be my first goal of the year. And then, obviously winning a state championship would be a secondary goal, but that’s not going to be my main focus this year. I think it’s bad to focus on what other people are going to do, because we can’t control that,” Branum said. “If we do everything we can in our training, then there’s no reason that we shouldn’t see the results in competition. It’s you competing against you and you competing against the bar. That’s something that I’ve fallen in love with.”

All of this brings us back to that self-driven nature and competitive fire. It’s why Branum makes the perfect preferred walk-on candidate. Walk-ons have to be that way because nothing is guaranteed.

Branum understands the work ethic required to continue her improvement and the opportunity OU track and field assistant coach Jerel Langley has presented in front of her.

“He’s a funny person. I genuinely like his personality. His motto was, ‘You come in here, you become a better vaulter, but I also want you to become a better person.’ That was a really big point for me,” Branum said of Langley. “Even if I just walk on at OU, it’s going to be worth it because of the experience and everything I’m going to learn as a person from it and as an athlete. It’s something that money can’t buy.”

We chose a couple of national champions for our magazine covers this month. 🥎

Pick it up on newsstands February 1st or read now at BoydStreet.com