Being a conservative 19-year-old kid from Wichita, Kan. in 1970 was kind of boring.
After graduating from high school, Steven Sanders joined the Air Force and went to Vietnam for a year. Now, that was not boring, he says. That was an adventure.

Sanders worked with an eight-man team to install antennas for communications.

“We’d put up a ROM beak the size of half of a football field, and it was on big poles we had to string wires to,” Sanders said. “We’d only go about 1,200 miles, but there were no cell phones back then, so it’s how we communicated.” 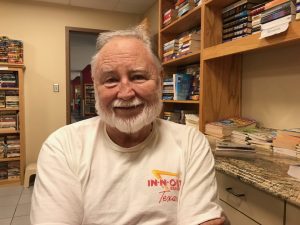 Sanders and his team were stationed at Cam Ranh Bay and dispatched to many different bases.

“About every 60 to 90 days, they’d bring us back to Cam Ranh, give us a break from our Spam and rice food and treat us to a steak dinner. Then they’d send us to the next communications installation site.”

Cam Ranh Bay was shelled a lot during the war, and Sanders remembers the first time it happened.

“We had a movie theater there, and in the middle of our movie, ‘Mrs. Robinson,’ we heard shelling. Our sergeant came in and said they would have to turn the movie off because we needed to take cover. Because we were young, we felt indestructible and said, ‘naw, we’re not going to take cover,’ and they had to turn our movie back on. That was really pretty stupid, but that’s what we did. And when our movie was over, they were still lobbing a few shells in and we just walked back to the barracks and went to sleep,” Sanders laughed.

“That brotherhood prevented us from using drugs or even smoking marijuana because our lives really depended on the guy next to us. That was a really big deal when we’re working as fast as we can, 100 feet in the air before someone spotted us. So, if anyone was using drugs, we’d get him off our team.”

Returning home from Vietnam, Sanders said he was lucky to have one of the first little computers – an Atari – that he trained on. At that time, there were only about six web pages, so his computer skills were at the forefront of technology. Because of that, he was sent to Italy, where he installed command and control systems.

Sanders became a double amputee after experiencing the lasting side effects of Agent Orange, which the U.S. military dropped around military bases as a defoliant powerful enough to clear the vegetation from jungles.

For 40 years, Sanders has lived with diabetes and its complications, had open-heart surgery, a kidney transplant, neuropathy, hearing loss, glaucoma and more.

“We just didn’t know the ramifications at the time of Agent Orange,” he said.

“The only thing I did right in my life was get married,” Sanders said proudly. “Heidi and I have been married for 41 years and have twin, 26-year-old sons, who just graduated from the University of Oklahoma. One has a degree in pharmacy, and the other is a physician’s assistant.”

Sanders is living at the Oklahoma Veteran’s Center in Norman due to complications he developed from a kidney transplant. Now, he’s rebuilding his immune system and undergoing physical therapy twice a day to gain the upper-body strength he needs to support his prosthetic legs. He expects to be back at home in Oklahoma City in a few months.

“I should be walking in six to eight months, probably without a cane.”