Whether it’s from the lack of athletic ability or the strain of time management, playing two sports in college athletics is incredibly rare, and doing so, especially at a high level, takes a very special athlete.

It’s not about being the next Deion Sanders or Bo Jackson and it’s not about drawing comparisons to Russell Wilson or Jameis Winston. For University of Oklahoma quarterback Kyler Murray, balancing several challenging endeavors is simply business as usual.

“I’ve been playing sports my whole life. It’s what I do,” Murray said. “If I had a say, I’d be playing basketball right now. Just having options and being blessed to play baseball and football at a high level at OU, I don’t take it for granted. It is definitely something I dreamed of.”

Kyler Murray was a star athlete in prep school as he led Allen High School to three straight Texas state championships in football, while compiling a remarkable 42-0 record as the starter. During his high school career, he passed for more than 10,000 yards, rushed for another 4,100 yards and totaled almost 190 touchdowns. He was named the Gatorade National Player of the Year and could have attended any college in the country.

Murray was more than just a star on the gridiron.  As a second baseman and shortstop on the Allen High School baseball team, Murray was viewed as a Top 50 prospect for the 2015 Major League Baseball Draft. His dual sport success made him the first high school athlete to play in both the Under Armour All-America football and baseball games. Despite the potential of a Major League Baseball career, as the draft approached, Murray opted out, deciding to continue with both sports at the college level. 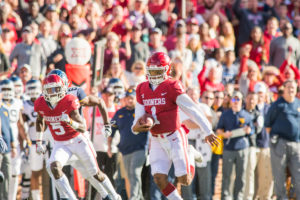 Murray chose to attend Texas A&M University but decided to transfer after the football season his freshman year. With his Texas A&M experience behind him, Murray looked to make an immediate impact at OU, but the gridiron would have to wait until the 2017 season due to NCAA transfer rules.

Murray was able to showcase his athletic ability for the first time in a Sooner jersey during the 2016 spring game, averaging 22 yards per pass and completing 6o percent of his passes. He also averaged almost five yards per carry. Meanwhile, he made his first official appearance as a Sooner athlete on the baseball diamond last spring.

THE IMPACT ON THE DIAMOND

Murray says the 2017 baseball season was a struggle. He had been away from baseball for a year and was splitting time between spring football and baseball, looking for a rhythm at the plate, where he had only six singles in 49 at-bats. While he did have a team-high 12 stolen bases. Murray is looking for bigger things in 2018. Going into his second season as a Sooner, Murray said he is already more comfortable. 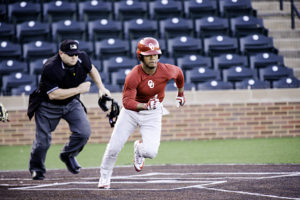 As Murray prepares to hit the diamond with new head coach Skip Johnson, there have been more changes than just the voice in the dugout.  Murray has a new position, moving from left field to center field.

Left was harder for me with the angles and the wind and the way the ball comes off the bat. But for me, center has been a pretty smooth transition,” Murray said.

Johnson is looking to Murray to be a difference maker for the Sooners in 2018.

This past January, as Baker Mayfield was taking part in his final post-game media session, the Heisman Trophy winner was asked about the future for OU football.

In the opposite corner of the locker room, Murray was answering similar questions about the future.

“I’m fully preparing myself in every way, shape and form to be the quarterback of this team,” Murray said. “Obviously, there’s going to be competition. My job is to come in, get better every day and lead this team.” 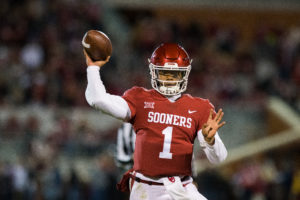 Murray’s on-field performances last season have been encouraging. In mop-up duty against UTEP, he completed 10 of 11 passes for 149 yards and a touchdown. When called upon against Tulane, he responded with an 87-yard touchdown strike to Marquise Brown. When given the start against West Virginia, Murray responded with a 66-yard run on the first play from scrimmage.

With the balance of baseball and football, time management issues are a challenge. But Head Coach Lincoln Riley has learned lessons from last season.

The coaches have a solid plan. Murray has the athletic ability. But what is the biggest challenge for the Sooner centerfielder/quarterback? Murray points to the clock.

“Finding the time to do school work is the hardest part of all of this,” Murray said with a smile.  “Baseball and football, they’ve done such a great job of making it easy on me that it’s not hard from a time management perspective. School work is the roughest part of this.”

He does try to stretch a few more hours in his day.

While playing baseball, Murray is also in the midst of off-season conditioning for football and even that is different this off-season. Benny Wiley has taken over as the new director of sports performance, and in Murray’s eyes, it has helped him immensely.

“Coach Wiley is great. Everything he does is calculated,” Murray said. “Everything we do in the weight room, there is a reason for it. I think he is a step in the right direction for going to a national championship.”

But what about the fans? You know the group that may think it is impossible for the starting quarterback to play another sport, what about the naysayers?

“Well, I’m not the starting QB yet,” Murray says with a wry smile. “They’re going to do what they want to do, say what they are going to say. For me, it’s baseball season and the focus is on this season. When football season comes, I’ll be ready for it.”

Murray has just one goal, and its winning championships at the University of Oklahoma.  – BSM

T.J Moe was an incredible wide receiver at Mizzou, but also teammates with L’Damian Washington.

@TJMoe28 is adamant he thinks he’ll do an incredible job with his new role of wide receivers coach at OU. @LWashington_2 pic.twitter.com/onZ4…

Food at the Texas State Fair:

Is it overrated, underrated or just right? pic.twitter.com/Zzmo…

Remember that time Brennan Clay called game in against Oklahoma State in 2012? pic.twitter.com/e4IA…

Bob Stoops has advice for OU fans with the situation:

“To have a degree of understanding for everything of all parties and to let it go.” pic.twitter.com/lAaG…

“I’ll promise you, he isn’t searching what anyone else thinks.” pic.twitter.com/gW1V…