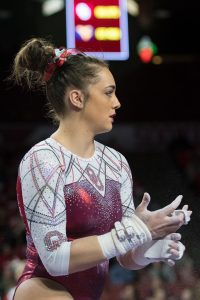 As the University of Oklahoma’s women’s gymnastics team prepares for a new season, their sights are set on an old goal – win a national championship.

That expectation has become the norm under 14-year, head coach K.J. Kindler. The Sooners already have three national titles under Kindler’s guidance, and the team may have its most talented roster as they look to make a push for their fourth title.

The drive for a championship in 2019 is fueled by heartbreak from the 2018 National Championships in St. Louis. Oklahoma looked to be in control and on the way to back-to-back national championships, only a near perfect score could possibly beat them. Unfortunately, that is exactly what happened. UCLA standout Christine Peng-Peng registered a perfect 10 on the balance beam and the UCLA Bruins took home its first national title since 2010.

Despite the disappointment, Kindler took pride in how her team performed.

“At the end of the day, we can look back and say we absolutely had one of our best performances,” Kindler said. “That’s the only thing you can ask of your team. You can’t control every part of these moments. We controlled what we could, and we did an excellent job.”

“But as far as regrouping, it just is great motivation. It wouldn’t matter if we won a national championship or came in second or 14th, that’s how we work as a staff and a team. We move on to the next moment and get working forward.”

That next moment for the Sooners began as soon as they returned home from St. Louis. With a strong roster of returning talent and a solid group of newcomers, the Sooners immediately hit the gym with the focus of getting back to the top.

“It has been great to see the way they have responded,” Kindler said. “I know a lot of sports aren’t able to practice in the summer, so they take breaks. In gym, it’s difficult to do that. You have to stay fit, stay strong… because that is when injuries happen. We are always flipping, always going upside down, and we have to be in tune. There is no moment that you can’t be unfocused doing gym. That air awareness, you can’t lose that.”

Any extra motivation the Sooners might need was helped with their pre-season ranking. Despite registering more first place votes than any other team, the Sooners found themselves in the No. 2 spot, looking up at pre-season No. 1 UCLA.

“This team is improved from last year’s team, especially on vault and beam in my opinion,” Kindler said. “On balance beam during our intra-squad, we fill out these things called inquiries we can hand to a judge if we don’t like there score. When I was filling those out, I noticed that every person has upgraded their balance beam routine. They’ve obviously worked hard, and I see the same thing on vault. We need to build up our depth in bars. Floor is coming together and that is all about making that choreography click with the tumbling.”

The return of Maggie Nichols provides the Sooners with one of the most electric, dynamic and decorated gymnasts. In 2018, she held the top spot in the all-around every week of the season, culminating in an NCAA Individual National Championship in the all-around. Nichols added two more national titles on bars and floor. She is the only gymnast to ever post two perfect 10s on every event, becoming the first and only gymnast to post back-to-back “Gym Slams” with a 10 on every event in consecutive seasons. Along with her honors on the national level, Nichols was also the 2018 South Central Region Gymnast of the Year, the 2018 Big 12 Gymnast of the Year and a two-time Big 12 Individual Champion, in floor and all-around.

The talented junior has garnered every imaginable award possible and continues to step up her game, not only in the gym but also as a leader.
“Maggie has been a leader since she walked in the door,” Kindler said. “As you get older, there is no doubt you feel you have a bigger voice. As they feel comfortable, as they have earned respect, they believe they can now speak, and I think that is where Maggie is now.”

The talented Sooner roster will be challenged by one of the most difficult and exciting schedules in program history. The Sooners’ home slate features four powerhouse meets with competition against 2018 NCAA Championship teams Alabama, Florida, Georgia and UCLA. Along with Oklahoma, the five teams have combined to win the last 23 NCAA Championships.

“This is what I call a dream home schedule,” Kindler said. “What an amazing opportunity for Sooner fans to see the best of the best the NCAA has to offer right here in Norman. This slate is a beast. It will bring challenge, excitement, artistry and edge-of-your-seat moments. It’s a top-of-the-mountain, once-in-a-lifetime kind of home schedule.”

With a talented core of young gymnasts competing at the highest level possible all season, the Sooners are poised to return to the top of women’s gymnastics. As Kindler continues to etch her name among the greatest in the sport, this Sooner squad is in position to once again challenge for a national title. – BSM