It’s about time, right? That was the reaction from Sooner fans when OU made its first appearance into the AP Top 25 this week with a No. 17 ranking coming on the heels of an upset win at then-No. 3 Wichita State.

Well, feel free to keep the “put-the-nation-on-notice” train rolling. Freshman point guard Trae Young sure did last night to the tune of 26 points and an NCAA record-tying 22 assists in OU’s 105-68 victory over Northwestern State. Dude was out there dropping dimes. All sorts of them. Alley oops, drop-offs, shovel passes, kick outs. It was a spectacle.

Nationally, the Trae Young show is on fire and a pair of my favorite college basketball analysts are catching the fever. 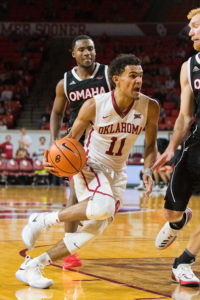 CBS Sports college basketball columnist and TV analyst Gary Parrish put the Sooners at No. 13 in his updated CBS Sports Top 25 (and 1) and had this to say about Young:

“People keep comparing Trae Young to Stephen Curry. And I understand why. But the remarkable truth is that the Oklahoma freshman is statistically better right now than Curry was in his first season at Davidson.

Tuesday night was a reminder.

Young finished with 26 points and 22 assists in a 105-68 win over Northwestern State. So he’s now averaging 28.5 points and 10.2 assists on the season. Both numbers rank No. 1 nationally, case you didn’t know. And even if the 6-foot-2 point guard’s averages fall once the competition increases courtesy of a Big 12 schedule, they’ll still likely end up topping Curry’s freshman-year averages of 21.5 points and 2.8 assists. (For what it’s worth, Young is also shooting higher percentages from the field and free throw line through 10 games than Curry did in 34 games as a freshman — meaning it’s not like his numbers are inflated in an inefficient way.)

Simply put, Trae Young is the story of college basketball. Literally nobody expected this.”

That’s high praise from Parrish. You can check out his Top 25 (and 1) rankings here and I highly suggest giving him a follow on Twitter (@GaryParrishCBS) for a wealth of college basketball information.

Then, there’s ESPN college basketball analyst Jay Bilas that put together a list of the best things he’s seen so far this season. Trae Young was a familiar name. He selected Young as his “best freshman scorer,” “best freshman passer” and “best offensive player.” Here’s a smattering of what Bilas wrote about Young: 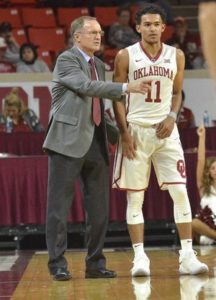 “This kid is ridiculous. Young has an extraordinary handle, gets anywhere on the floor he wants, can shoot it with range and flair, and does a great job of finishing over length, getting to the foul line and setting up others. He had a reputation as a gunner in high school and for not being a willing passer, but I have seen no such evidence of that at Oklahoma. Young leads the nation in scoring at better than 28 points, and is the only Power 5 player in the top 15 in the nation in scoring.

“He has vision and the ability to deliver the ball. He is a joy to watch. Young is a young Stephen Curry, but far ahead of where Curry was at a similar age. Of course, that doesn’t mean that Young will stay on this trajectory, because very few ever have or even can. But this is only about right now, and this kid is ridiculously good now.”

“We’re not very good, obviously, right now. We’ve got a lot to get better at.” pic.twitter.com/bFya…

OU sits at 3-2 on the season. What’s your prediction for the final overall record? pic.twitter.com/EY8x…

Sooner fans, give us one reason you feel confident in OU winning today. pic.twitter.com/n8OC…