The University of Oklahoma has been the center of the college gymnastics world for nearly 10 years, and the success has been so constant the term “Dynasty” is being used to describe what both the men’s and women’s teams have accomplished on a national level.

During the championship weekend for men’s and women’s gymnastics on April 20 and 21, the University of Oklahoma again showed the country what GymU was all about.

It took a miraculous performance to take the title from The University of Oklahoma women’s gymnastics team. After posting a score of 198.000 or better for the 10th time this season, the Sooners looked primed for its third straight national championship. But a walk-off perfect 10 by UCLA’s Peng-Peng Lee on the beam in the final rotation sealed the incredible comeback for the Bruins and left the Sooners heartbroken.

“Obviously I am super proud of these ladies,” OU head coach KJ Kindler said. “But when you set the standard so high, they are disappointed. They wanted it. They worked for it. I mean it is hard to explain to them why they didn’t get it, but you have to get it right on the right day. We were just a hair short.” 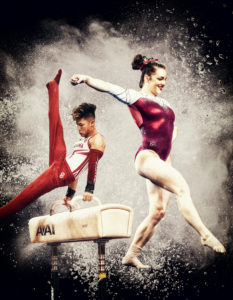 “Honestly, we did everything that we could,” Kindler added. “We handled that really tough rotation, first rotation on balance beam. Everyone responded when we had that mistake and did the best routines that they have ever done. We just kept fighting all through the meet. At the end of the day, it just wasn’t quite enough.”

The end was not what the Sooners wanted as a team, but on Friday, the Sooners were able to rack up individual honors. Sophomore Maggie Nichols won the all-around title, tying the NCAA championship record with a 39.8125. Nichols also won a share of the bars title with a perfect 10 and a share of floor with a 9.9625. With four individual championships to her name after winning the bars title in 2017, Nichols is tied with Kelly Garrison for most individual titles at Oklahoma.

“I’m really proud of Maggie,” Kindler said. “We approached tonight as a ‘we’ meet, and ‘us’ meet, and it is tough because all those individual things are on the line. We have to get our minds straight that we are here for the team. She totally bought into that. She had less pressure on herself because of that. Obviously, the result was wonderful.”
For Nichols, it was all about team.

OU became just the third program in history to win at least four consecutive national titles (Illinois from 1939 to 1942 and Nebraska from 1979 to 1982). The title is also the Sooners’ 12th overall – tying them with Penn State for most in NCAA history – and the ninth of head coach Mark Williams’ 19-year tenure.

Williams said the 2018 team has shown a lot of grit through the season. 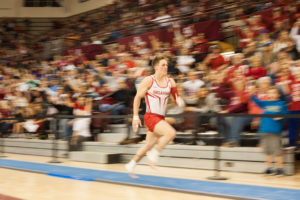 “Most don’t know how unlikely this was. You can call it a dynasty, but this group was built from the ground up. We lost two thirds of the scores from the 2017 team and guys who returned had eight surgeries between them,” Williams said.

“In December, for the first time ever, we didn’t have enough guys for intrasquad. We had eight guys who had never competed at the NCAAs before, and they performed like veterans. We even struggled with the stomach flu all week. In fact, Hunter Justus became ill during the meet, but he would not be denied. This team personifies mental toughness.”

“This is the most exciting win I have had in my gymnastics career,” Moldauer said. “We started out as an inexperienced team and a team that a lot of people doubted. Throughout the season, we grew stronger and stronger. Even before the meet, I thought we were going to win it. It’s like that Sooner Magic we talk about. We went event by event. We saw we were down, but it didn’t matter. It didn’t stop us. If we do our job, we can keep going.”

The Sooners’ title capped their fourth straight undefeated season. In that span, Oklahoma has racked up 97 straight victories, which stands as the fourth-longest winning streak in NCAA history.

“I’m ecstatic. You hold your breath all year, knowing you are doing the right thing. You still have to put it all on the floor the day of the championship,” Williams added. “I knew that we were a very well-prepared team. I knew the guys felt good when we started. This is competition, and we were pushed by a number of other teams. These guys fought and clawed. They weren’t willing to give it away, and I am really impressed and really proud of them. This is going to be one I remember because I didn’t feel like it was guaranteed at any point until the last guy landed.” – BSM