They are young, old, married and single. They are unemployed, underemployed or working multiple jobs to support multiple children. They are black, white, Hispanic and Asian. Some are students while others are veterans or handicapped.

The one thing they all have in common is that they are hungry.

In Oklahoma, one in six adults and one in four children struggle with hunger, according to the Regional Food Bank of Oklahoma. 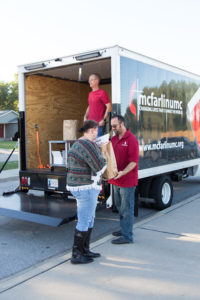 McFarlin Memorial United Methodist Church has been involved in the fight against hunger for more than 10 years, partnering with the Regional Food Bank to make food available to residents in Norman, Noble and Little Axe through its food pantry at 419 S University Blvd.
But, sometimes, food pantries staffed by volunteers open only a couple of days a week are not enough. Job schedules, limited transportation or childcare demands are some of the barriers standing between people and the extra sack of groceries they need to get them through the week.

A few years ago, McFarlin recognized the need to innovate. If the people could not come to them, the church should go to the people.

McFarlin Associate Pastor Wendi Neal said the church secured a $41,751 grant from the Oklahoma Conference of the United Methodist Church in 2016 and used the money to buy a truck to deliver food to Norman neighborhoods four times a month.

McFarlin’s main food pantry is only open Tuesdays and Thursdays during the workday hours. The mobile food pantry provides an opportunity for people to access food closer to their homes and after the workday ends, when schedules are more flexible. 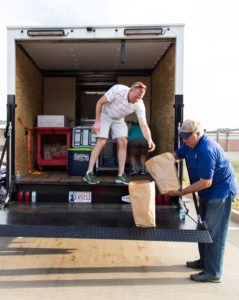 Their food truck mission has been up and running for more than a year and a half, making rounds to neighborhood schools one evening a week, delivering paper sacks full of canned vegetables and fruit, peanut butter, pasta, rice, boxes of cereal, milk, meat and margarine.
The church acquires the food through regular deliveries from the Regional Food Bank as well as through donations from Target, Homeland and Aldi grocery stores.

Dennis said McFarlin volunteers pack the truck full of groceries in the late afternoon. Then, they head to one of the schools where they park from 5:30 and 7 p.m. and distribute sacks of food to a growing number of registered clients. The truck stops at Irving on the first Tuesday of each month; Jackson on the second Monday, Madison on the third Tuesday and Adams on the fourth Tuesday. 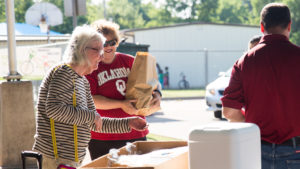 The truck is open to anyone living in Norman, Noble or Little Axe, and it is not necessary to be affiliated with one of the schools.

He said first-time clients fill out an enrollment form with their names and other contact information as well as information about the number of adults and children in their homes and household income.

The reception was slow at first, Dennis said. People didn’t know what the truck was, and they wondered if the church might want something in return. However, McFarlin’s partnership with the four schools has helped the program communicate with the neighborhood communities, and the list of clients has been growing.

Pastor Neal said the number of people the food truck serves has doubled since the school year began last August.

Some school sites are busier than others, Dennis said.

“We have really built up a foundation of trust with them,” Dennis said. “Everyone is glad we’re there and pleased with the service. They understand that we’re there to help and not to proselytize or anything like that.”

While there is no religious pressure, Dennis said the church is serving God through its mobile food pantry.

“Jesus told us to help the hungry and feed the poor. That’s what we’re doing,” he said.
Faith is part of the outreach, he said. Volunteers lay “Why Jesus” pamphlets on a table for people to pick up if they’re interested in learning more about Christianity. The books are printed in English, Spanish and Mandarin, Dennis said.

There are people who come and want to pray, so volunteers step aside and say a prayer with them, Dennis said. The prayers are usually about something that is going on in their lives.

“These folks are so appreciative,” Dennis said. “Most of them are working poor. They’re not trying to take advantage of the system. They are just trying to make it. Helping them is just really fulfilling to me,” Dennis said.

McFarlin’s Mobile Food Pantry is operated entirely by a corps of 65 to 70 volunteers, Dennis said. There are eight crews, doing jobs ranging from shopping at grocery stores for perishable items like milk and meats, to sackers and the delivery people who go to the sites.

They are a wonderful, dedicated group of people, Pastor Neal said.

“They are willing to be out there in the rain and the snow and the powerful Oklahoma winds because they want to be out there, and they don’t want people to be without food,” she said. – BSM