The Korean War memory that has stuck in Robert Dahl’s mind for nearly 70 years was his experience in the Battle of the Chosin Reservoir in November 1950.

The losses experienced during that battle are something that Dahl has never been able to shake, and something that he wouldn’t wish on anyone. Out of the 52 men in his platoon, Dahl was one of only four that survived. 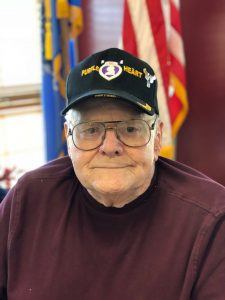 He considers himself fortunate for escaping with only one bullet wound in his arm, which he received on the day after his 18th birthday.

Dahl was only 17 when he decided to join the military. He was bright eyed and ready for an adventure and signed on expecting to serve in Japan, a place he had only dreamed of going.
Dahl quickly found that military life was nothing like he had experienced, and he enjoyed it very much.

The U.S. Army made it possible for Dahl to get out of his hometown of Chicago and see the world. He was sent to Japan, as planned, and he was completely enamored with it.

Unfortunately, after only a few short months in Japan, Dahl was sent to fight in Korea.
During the 13 months that he spent in Korea, Dahl was in a heavy mortar company, where he started out as an ammo bearer. He then served as a gunner and then a forward observer.

“A forward observer is a very hazardous job because you’re up close, looking right at the enemy,” Dahl said. “After about eight and a half months, I had had enough.”

Dahl’s job change request was granted, and he served as the Jeep driver for his platoon leader for the remainder of his time in Korea.

After returning to the United States, the corporal spent another year at Camp Roberts in California, training new recruits how to use mortars, a responsibility that he didn’t take lightly.

“I was eager to get up in the morning and go to work every day. I enjoyed that position enormously, and I was very conscientious about it. I knew that what I was teaching could mean the difference between someone coming home from their tour or not. I really valued the chance to talk to people and share with them the knowledge that I’ve acquired.”

After being honorably discharged, it took Dahl a while to adjust to civilian life. He started apprenticing as a tool and die maker, but it wasn’t until he got a job as a police officer in Barrington, Indiana that Dahl felt he had truly found his calling. He retired from the police force after more than 20 years of service.

Dahl moved to Oklahoma in 2000 with his wife of 29 years, Elaine. Dahl has been involved with the Norman Veteran’s Center for about five years, and he has felt fortunate for the many opportunities it has allowed him to connect with other veterans. – 19SM