Facing dwindling budgets, staff reductions, debt and an uncertain future of appropriations for higher education, the University of Oklahoma Board of Regents began their search for a successor to replace President David L. Boren, it is no surprise they found a leader who has sailed in rough waters before.

Regents Chairman Clayton I. Bennett introduced former business executive James L. Gallogly as OU’s 14th president on March 26, describing him as a man with leadership qualities the university will value as it moves into the future. 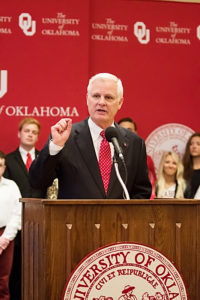 “Jim’s skill-set is a perfect match for this unique time in our history,” Bennett said. “He is a builder, known for having strategic vision, for managing large and complex organizations and for mentoring and inspiring great teams to achieve results.”

Speaking to a standing-room only crowd of hundreds in the OU Memorial Union Ballroom, Gallogly, 65, outlined an executive career of more than 30 years in the energy industry, highlighting the type of business and organizational acumen regents were no doubt looking for when they began their search last fall.

In the early 2000s, he assisted with a merger between Phillips and Ponca City-based Conoco, a transaction that ensured the future growth and survival of both companies. The resulting ConocoPhillips Corp. immediately took its place as a Fortune 500 company and became one of the nation’s largest oil and natural gas producers.

But his most defining accomplishment came after his career with ConocoPhillips.

After 29 years with the oil company, Gallogly joined LyondellBasell as chairman and chief executive officer at a time when the company was in Chapter 11 bankruptcy with more than $20 billion in debt. 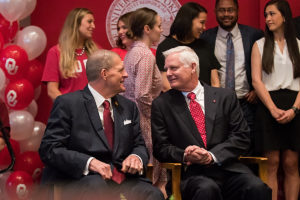 He told the audience of students, faculty, staff and media how he and his team guided the company out of bankruptcy in record time and successfully repositioned it as one of the world’s largest petrochemical, polymer and refining companies.

“In a few short years, the stock price went from $17 to $115,” he said. “We exited Chapter 11 quicker than any company, and we became investor grade quicker than any company. Our toughest competitor was Dow Chemical, and a few days before I announced my retirement, we almost equaled them in market cap,” Gallogly told the audience.

In 2014, less than four years after he arrived, LyondellBasell reported revenues of $45.6 billion and earnings of $4.1 billion.

Regent Chair Bennett said Gallogly is a world-class, in-demand, transformative leader that the university is honored to name as its next president.

Gallogly said he intends to build on the foundation established by Boren, who will retire on June 30 after serving 23 years as OU’s president.

Boren is among America’s longest-serving university presidents, and his retirement will come after completing 51 years of public service in the Oklahoma Legislature, as governor of Oklahoma, U.S. Senator and OU’s president. 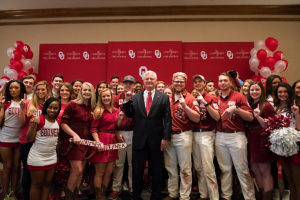 Under Boren’s leadership, the University emerged as a “pacesetter university in American public higher education,” with 31 major new programs initiated during his tenure. Since 1994, more than $2 billion in construction projects have been completed or are underway on OU’s three campuses.

“I have known Jim Gallogly for many years,” Boren said in a statement. “He is a person of exceptional ability and has been a committed supporter of the university. He truly loves the university and our students. He and his wife Janet will be worthy leaders of our university family.”

“It’s impressive to know that many leaders he’s mentored and developed during his career have ascended to become CEOs,” said Bennett, who also serves as chairman of the Oklahoma City Thunder NBA franchise and chairman of Oklahoma City-based Dorchester Capital Corp.

“He’ll lead from the front, working with teams at every level and teaching in the classroom as he takes on his next major career challenge. While Jim may not come from academia, we know he’ll draw skillfully on OU’s world-class faculty, who will be critical in assisting him during this transition,” Bennett said.

“We aspire to greatness. Nothing less,” Gallogly said during his introduction. “I will push very hard. I will ask a great deal. We know what that looks like on a football field, don’t we?”

“We expect perfection, and we are going to have that same standard in every single thing we do at this university,” he said. “We will work together as a team, and we will achieve great things, because we are Sooners!”  – BSM