Sophomore Payne Maga grounded one over to the Carl Albert second baseman who bobbled it and couldn’t make the throw over to first in time to punch out Maga. Meanwhile, junior Harvey Cooper raced from second to third on the one-out grounder.

As Maga beat out the throw, Cooper got the sign from NHS head baseball coach Jeff Brewer to try and end it right then and there. Cooper sprinted home, the throw to the dish was wide and the Tigers celebrated a wild, 12-inning season-opening walk-off 3-2 winner over the Titans.

“Crazy deal to be opening night and you’re going bottom 12. The guys battled. That’s what we expect. We teach around here, grind away. We knew in high school baseball through 12 innings, they were going to make a mistake somewhere and it luckily worked for us on a squib, infield E3 and then another E3 trying to push the issue,” Brewer said.

Maybe a marathon, opening-day winner wasn’t quite what Brewer would have drawn up in a perfect world. Skippers like options when it comes to pitching depth. But, from another perspective, this might have been just what the doctor ordered to boot off this 2018 campaign. 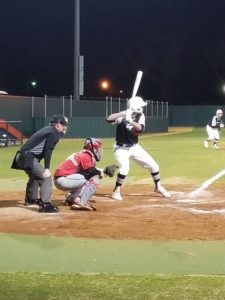 NHS stumbled to a 11-21 record last spring in Brewer’s first season. The Tigers struggled to get over the hump in tight ball games, finishing 3-10 in games decided by two runs and a paltry 1-8 in one-run games.

“Man, I’m proud of the guys. You could tell there’s exuberance in there. There’s a passion in the way we play the game. You’re going to see a difference in things this year from last year,” Brewer said. “We played a bunch of one, two-run ball games last year. Now, we’re going to win them. We learned how to play in them, how we’re learning how to finish hopefully.”

Brewer was pleased with how his pitching staff held up. The opening-day starter was senior Bryson Armstrong, who threw 93 pitches, went five innings and gave up two earned runs.

“Armstrong topped out at 85 today. He doesn’t get a win today, instead a no-decision but pitched well. He threw 90-some pitches, five complete. For opening day, that’s a great outing,” Brewer said.

Senior Marco Fisher, sophomore Cade Horton and Maga combined to pitch the next seven innings of relief scoreless. Several times they worked out of trouble. Brewer came away impressed with the work behind the plate from catcher Tyler Lindsay, too.

“This is his first year. We’ve had Justin Cook who is at OU now. He’s kind of sat in the shadows waiting for his chance. He had a great day. He had a sac fly, no passed balls on a couple wild pitches. I was really unsure whether he could handle it and he handles 85, 88 pitching from day one, so I’m proud of him,” Brewer said. 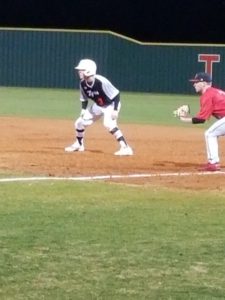 Brewer was quick to point out a Cooper plate appearance as one of the memorable moments in the opening-day win for him and the culture he’s looking to build.

“He was down 0-2 tyring to bunt, I keep the bunt on and we walk. We get four straight pitches on Harvey Cooper. We don’t win the game on that one, but that’s team baseball. You trust that it’s going to work, you trust my decisions. And sometimes I make bad decisions. And they pick me up, I pick them up,” Brewer said.

“It’s just playing a game of small-ball baseball. We’re not guys that are going to hit it off the wall and break the wall down and hit bombs. We’re gonna bunt, we’re gonna run, we’re gonna put pressure on people and we’re going to expose them. You get exposed in high school baseball by pressure. We do at times. We did last year. Now that we’ve worked through our defensive situational stuff, we want to put it back on other people like we got last year.”

For one night, it was a team that had turned the corner in a tight contest. They get another chance to keep the momentum rolling tonight when they travel to Ardmore at 5 p.m. Brewer understands the process needs to continue.

“We have to keep this rolling. This is game one. Whether we won it or lost it, it was a good game. But, to win it, it definitely puts you in a better mood. To find a way to win it, it makes it a better night when I get to go see my kids. We’re excited,” Brewer said.

Call your shot: Who’s the next college football program to make a move and enter into a new conference? pic.twitter.com/oyCt…

The ESPY’s are this month and OU softball is well-represented.