Last year was a historic season for Coach Greg George’s Noble Bears. Noble put together a 10-3 record en route to its first appearance in the 5A state semifinals.

“To get to go on that journey with our kids, to play and practice on Thanksgiving, it was a great feeling,” George said. “That’s where you want to get and to finally get that chance after 25 years, it was a great deal.”

The Oklahoma Secondary Schools Athletic Association reshuffled the districts for the 2018 season and Noble finds itself in 5A’s District 1 with Altus, Ardmore and Lawton MacArthur; all of whom were playoff teams last year. 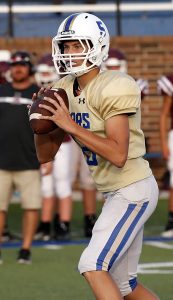 “If someone is looking at our district, people would say there are six teams who could be playoff teams and there’s only four spots,” George said. “People say it’s one of the toughest districts in the state, and I tend to agree. I know we have four playoff teams in this district from last year, and there were two more in Duncan and El Reno, who weren’t that far off either. So, it’s really tough.”

The Bears entered the 2017 season with a quarterback battle between now senior Hayden Lingle (6’1, 175), junior Austin Fisher (5’8, 155) and junior Jay Smith (5’10, 160), following the graduation of three-year starter Baehlor Buol. Lingle grabbed hold of the job out of camp and never let go.

“Hayden did a great job,” George said. “He came in and put up great numbers. He not only ran our offense well, he did a great job leading the team last year. He’s out there being a leader for us this summer too working with his receivers on his own and getting bigger and stronger. He’s doing everything he needs to do to help make us better next year.”

“We’ve got four guys getting snaps back there right now, but Gavin is getting the main reps,” George said. “He’s a lot like Danny was. He’s a very north-south runner and we’ve got a lot of guys who compliment him with very different styles.”

The receiving corps will once again be talented in this season with seniors Isaiah Willhoite (6’, 160) and Bryan Henage and junior Jay Smith. While coach George says players like Henager and Smith will play major roles in the offense, he acknowledges there’s a reason why Willhoite led the team in touchdown receptions last year.

“Isaiah is definitely our go-to receiver,” he said. “He’s got speed, runs good routes and has really good hands. He makes the hard catch look easy.”

The offensive line will have to be rebuilt after losing three starters to graduation. Returning in 2018 are junior center Hunter Largent (6’2, 315) and senior guard Hayden Tener (6’2, 245).

“We’ve got some positions we still need to figure out, but we’ve got guys battling and fighting to get better, to get stronger,” George said. “We’ve got to make sure we’re physical again this year. We’re not there yet, but we’re getting close to where we need to be on the line.”

In the secondary, two-way players Isaiah Willhoite and Jay Smith will lead a talented group of players. Smith, who also competed for the starting quarterback job entering the season, was a key playmaker at corner and led the team in interceptions in 2017.

“We play a lot of spread teams, and we’ve been really good in the secondary,” George said. “We’re really good on all levels of the defense because our kids and coordinator Ray Crawley know this system. We’ve run it every year we’ve been here, and they really understand it because of that. They give us an opportunity to be good on that side again, and that’s a credit to those kids.”

Noble opens the 2018 season on the road against Newcastle August 31 and will begin district play September 16 at Duncan.– BSM