The City of Norman has always had a soft spot for its soccer programs. Through the years, families from all walks of life have consistently come together to be a part of the local soccer scene.

Don Rother, executive director of the Norman Youth Soccer Association and Norman North soccer coach, knows better than most just how unique the Norman community is in its support of the world’s most popular sport. 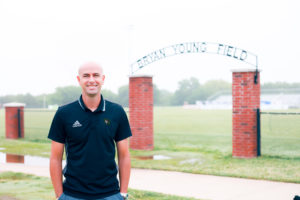 Rother started playing soccer at the age of 6 and he’s been involved with the sport ever since. He got his first taste of coaching during his freshman year of college, when he became the boys’ junior varsity soccer coach at Norman North High School. The next year, he started coaching club soccer as well. As time went on, his involvement with Norman soccer programs – and the number of teams that he coached – grew exponentially. By the time he graduated with a marketing degree from the University of Oklahoma, it was pretty clear that his future was on the soccer field.

For Rother, a big part of the sport’s appeal is the infinite number of scenarios that can happen during a game.

“There are so many variables that you have to learn, and it’s always constant. There are no timeouts or breaks,” he says. “Of course it’s great physical activity, but it’s also a great learning experience for the kids.” 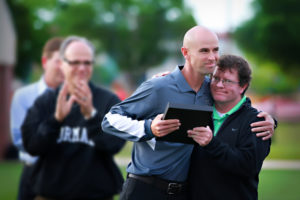 In Norman, the high school athletic programs and soccer clubs work together to ensure that the children get the most comprehensive soccer experience possible. Many cities see competition between the two types of athletic programs, but in Norman, they consistently cooperate and support each other. Rother suspects that this cohesiveness has played a big part in the immense popularity of soccer in Norman.

“We’re fortunate to have a lot of families that really support both the club and the high school to help them be successful,” says Rother. “The parents and children are so involved and supportive of the high schools and the soccer clubs working together. That’s part of what makes Norman soccer so unique and fun.”

In his position as the executive director for the Norman Youth Soccer Association, Rother is involved with most aspects of the club’s activities in Norman, including organizing tournaments, creating curricula, overseeing club staff and anything and everything in between.

Then, on top of that, he coaches too.

During Rother’s time with the NYSA, he helped facilitate the club’s partnership with the Celtic Football Club from Glasgow, Scotland. The Celtics offer two different summer camps, both of which will be held locally this year. The Celtic Elite Camp in June will host the top players from Celtic FC partner clubs across North America. The Celtic Soccer Academy in July offers children ages 7 to 19 the opportunity to learn from some of the team’s professional coaches. The partnership is a great experience for the Norman coaches too, notes Rother, as they learn a lot from their Celtic counterparts.

In addition to the partnership with Celtic FC, Rother also helped create the Oklahoma Premiere Club (OPC) and he now sits on the club’s board. The OPC is a statewide league that has created many top-level competition opportunities for Oklahoma soccer players.

Right now, Rother is especially excited about the soccer association’s acceptance into the Elite Clubs National League (ECNL). As the only club in the area—and one of only two clubs in the state – to be accepted into the program, the Norman Youth Soccer Association is in a unique position to offer soccer programs for athletes of all levels, from the recreational to the top elite players.

“This is a big opportunity for our players. It’s going to allow them to compete with top-level players from across the country,” says Rother, noting that the club’s membership with the ECNL will allow competitive players great exposure from college recruiters.

All of the exciting developments with the NYSA brought with them a bittersweet goodbye this May as Rother completed his last season as the head coach for the Norman North varsity girls’ soccer team.

“Being a high school coach, you see the kids every day, so you really have the chance to see the team growing and building their skills together,” says Rother.

He has held the position since 2011, and coached the team to their first state championship in program history in 2014.

“My favorite thing about being a coach has always been the ability to be a positive influence for the kids. That’s the thing that’s been hard for me to let go about teaching at the high school. I try to get all of our coaches to understand that while we want all of our players to learn and improve in soccer, at the end of the day, we have a big opportunity to change kids’ lives and have a positive impact on them.” 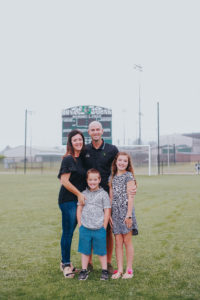 In the midst of his whirlwind of responsibilities within the Norman soccer scene, Rother spends any free time he can find with his wife, Sharlee and their two children, Bekham, 10, and Rowynn, 7. Sharlee owns a photography business – Sharlee Rother Photography – and also does website design and social media for businesses. Their son, Rowynn, is still very into soccer, but their daughter, Bekham, retired from the sport at the age of six and is now an avid dancer.

When he’s not coaching, organizing tournaments or spending time with his family, Rother can be found maintaining the Norman North High School soccer fields.

“Most people are surprised when they hear that’s my hobby, but mowing designs in the grass is very relaxing. I enjoy it. That’s my work of art.”– BSM

Head @OU_Wrestling coach @LouRosselli is on with @PlankShow recapping the Northern Iowa dual and previewing No. 8 Missouri. LISTEN: radio.securenetsyste… pic.twitter.com/3JYn…

Porter Moser was extremely complementary of the turnout from OU fans in last night’s Bedlam loss.

“That’s the first time I’ve seen a full house like this. I want to say thank to them. Very disappointed for our fanbase tonight, but they were great.” pic.twitter.com/6sif…