In the seventh inning, back-to-back strikeouts were pitched before an unpredictable chopper was fielded, the ball thrown to first and the final out called.

A dog pile ensued on the pitcher’s mound as the University of Oklahoma softball team won their fourth national championship in the Women’s College World Series.

Legendary Sooner coach Patty Gasso was in tears in the dugout as her team won back-to-back titles for the first time in her distinguished career.  The win made Gasso one of the most accomplished coaches in OU history. It’s no surprise she and her family are among Norman’s favorite residents.

Living in Norman for 23 glorious softball seasons, Gasso has earned a reputation as one of the most outstanding college softball coaches in the country.

Leaving her job coaching softball at Long Beach City College to come to OU, Gasso arrived from Southern California in 1995 with her husband, Jim, and son J.T. and their other son D.J. on the way. 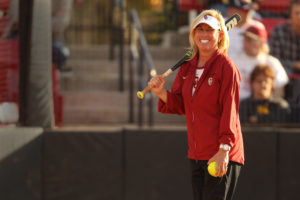 She spent the next four years building a program from the ground up and feeling that God led her family to Norman.

“We are a very spiritual family and felt God wanted us to find Norman.  We just felt God made all of this happen for us.”

Then, in 2000, everything fell into place. The Sooners won their first national softball championship, giving OU its first NCAA title in any women’s sport.

Aside from her coaching, her outstanding teams and the championships, Gasso said she really likes living in Norman.

“What brought me to Norman in the first place is the people. I was lived in the fast-pace of LA and everybody was pushing and shoving and was out to get what they wanted. Coming to Norman was an adjustment because life is a lot slower.  But I’ve attached to it, and now when I go back to LA to recruit, it’s difficult because I’m not used to the hustle and bustle. The people, the slowness, the genuine atmosphere in Norman are what I like because I’m a very low-key, chill kind of person.”

Gasso said she appreciates her neighborhood and her home, giving her a place to relax with family and friends.

“It’s a simple life, and because my job has me hustling all of the time, I don’t know if I would function well in that type of life all the time. The simple and the quiet are what I really like.”

Raising a family in Norman has been fun for Gasso, who said some of her families’ favorite activities were being able to attend OU games.

“One of the benefits of being the kids of a coach at OU is they get to go down on the sidelines of games,” she said. “We’ve seen some of the greatest basketball, baseball and football games while the boys were growing up, and we enjoyed going to bowl games and traveling on the road.  We just built our family vacations and activities around all the socialization of OU athletics.”

A lot of the athletes Gasso targets during recruitment are from Southern California or big cities in Texas, and there is a lot in Norman to help sway them to sign with OU.

“I think the kids are looking for something new and different, and Norman has that small-town feel. I think they really like the small-town atmosphere mixed with big-time college athletics and find the people of Norman and in the state of Oklahoma to be a good fit for them,” she said. “They feel people here are friendly, welcoming, sincere and loyal to their team.”

The loyal, enthusiastic fans are what led to expanding the stadium.

“We don’t want people to get used to watching at home because the sport and atmosphere is much more exciting to be there in person.  We have constant sell-outs and standing room only. The expansion is well overdue and is very much needed.”

Since family is vitally important to Gasso, she has made coaching “very, very much a family affair,” she said.

Gasso’s youngest son, D.J., played baseball at Bradley University in Illinois, where he graduated. With one year of eligibility remaining, D.J. transferred to UCO in Edmond so he could spend more time with his family.

“It allows us to see him play and allows him to see us play, so now we are truly all back together in the same area.”

A very happy National Girls and Women in Sports Day to everyone at @OU_Athletics and beyond!