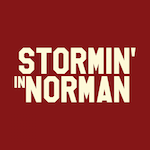 Oklahoma football comes up at No. 7 in 2017 AP Preseason Poll – Stormin