What characteristics turn an ordinary position into a dream job?

Norman firefighter Justin Vinyard doesn’t have to think twice about his answer- excitement, teamwork and community service. He’s been with the Norman Fire Department for more than seven years, and he’ll still confidently tell anyone that asks that he’s found the best career he could dream of. 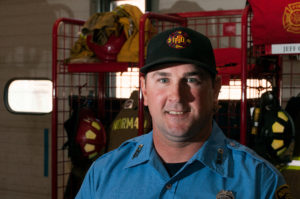 Vinyard recalls exciting childhood trips from his home in Choctaw to visit his uncle’s fire station in Midwest City. He remembers exploring the station, wide-eyed and undeniably impressed by the crew and their shiny equipment. That was when the idea of being a firefighter took root in the back of his mind. As he got older it kept pushing its way closer and closer to the front, and by the time he finished college, Vinyard couldn’t picture himself doing anything else.

“Being a firefighter never gets boring,” said Vinyard. “Every shift is different, so you never know what your day is going to be like.”

Each new call brings with it a new puzzle to solve as quickly as possible, and the firefighters must rise to the challenge. This fast-paced problem solving is one of the things that Vinyard loves most about his job.

“One minute, you’re in the station doing something routine, and the next minute you’re dropping everything and heading out to go where you’re needed. You never know what’s going to be at the other end of a call. I love that. It keeps you on your toes.”

When the fire engine arrives on a scene, the crew has a short window of time to coordinate tasks and restore order to an often chaotic situation. Backed by countless hours of training and working together as a team, the crew goes to work, led by their captain. Each firefighter plays an important role in stabilizing the scene.

So much of the job depends on successful teamwork, and after playing baseball at Oklahoma State University, and being on the team that won the 2004 Big 12 Baseball Championship, Vinyard is no stranger to practice. He is thankful to be a part of a strong crew determined not to let each other down. Firefighters can be competitive at times, especially during training, but it’s all in the pursuit of being able to protect Norman citizens and each other when they’re out on a call.

A career as a firefighter isn’t for the faint of heart. The job is demanding, and potentially dangerous, but Vinyard wouldn’t have it any other way.

Vinyard lives in Midwest City with his wife, Kelli, and son Nolan. At the time of this interview with Boyd Street, Vinyard and his wife were awaiting the birth of their second child.   – BSM

18 days until kickoff in Norman.

Bob Stoops had 18 incredible seasons as head coach at OU.

Happy Birthday to our favorite Superman!

Thanks to Rose Rock Habitat for Humanity for letting us be a part of this historic day. Make sure to come by and see them on Main St in Norman. pic.twitter.com/vNzg…