The word “special” is thrown around a lot. The dictionary defines the word as being better, greater or otherwise different from what is usual, which is a fitting description of the senior class on the University of Oklahoma softball team.

The six members of this senior class have captured back-to-back national championships, and their team has been in the top five all season. 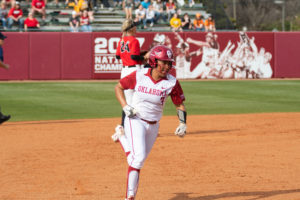 Paige Parker, Leah Wodach, Nicole Pendley and Kelsey Arnold were part of a recruiting class that stepped on campus two years after the Sooners had captured its second national championship. With lofty expectations even for their freshman season, they experienced the disappointment of coming up short with a Super Regional loss to Alabama in 2015.

“It was rough. That was an incredible class of people,” catcher Wodach said of the heartbreaking end to the 2015 season. “We just took the mindset of not wanting to feel that way again.”

The loss meant the Sooners had to find a new identity without their graduating leaders. Lauren Chamberlin, Shelby Pendley and Georgia Casey were the names that had become synonymous with success at Oklahoma.

“We committed that we’re going to do whatever we could to win because losing sucks and we hate to lose,” Wodach said. “It’s been fun. It’s been tough to step up into those big roles, but we’ve done a good job finding our place.”

Many felt that the Sooners would disappear from the national landscape while re-building around a young core. But the group had other ideas. From the ashes of disappointment came a competitive fire that has carried the Sooners to back-to-back national titles. The Sooners are one of only three programs who have won three or more national titles.

“Sometimes I get emotional. We wouldn’t be able to do this without our family and our friends behind it. The experience has taught us a lot of lessons to compete, push and work harder,” she said.

Parker never stopped working. From the disappointment of that stunning Alabama defeat her freshman year, Parker has developed into one of the most dominant pitchers in the sport. Arnold is the leader, a two-time captain and one of the best defensive shortstops in the country. Wodach provides the grit, as a hard-working catcher who has battled through injuries and adversity. Pendley is quite possibly one of the best athletes to ever wear the Sooner uniform. She can do a little bit of everything at the plate and in the field. Along the way, the Sooners added a left-handed power pitching closer and a hard-hitting catcher.

And now, the class is waiting to write its final chapter.

“You lose a lot of athletes and you miss them and wish them well, but this team has meant a lot to me. They’re great leaders. Kelsey Arnold and Paige Parker are the epitome of team. They don’t want the accolades. They don’t want the spotlight. They just want to win for their team. It’s the greatest kind of athlete to coach.”

As time progressed, the senior class has added key components in the circle and depth behind the plate. Both pieces were necessary after the championship run of 2016.

Parker pitched just about every inning of the post season. In fact, she pitched 69 post-season innings and the only time she did not pitch the Sooners lost. The performance was dominating and exhausting. 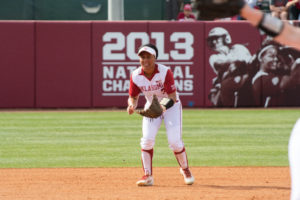 “I don’t think we’ll ever see another pitcher do that,” Gasso said.

The Sooners needed help in the circle and found it in Paige Lowery, who emerged as the best closer in Sooner softball history, setting the school career record for saves in one season.

Some might have seen it as a challenge to join a team that had an ace and had just won a national title. But Lowery discovered the true character of this senior class and the program as well.

“I didn’t know what to expect and wanted to be around good people, not necessarily a good softball team but good people. I needed a good home,” Lowery said.

“It has been so easy to feel comfortable and feel free to pitch the best I can because I know the people behind me are good people and everyone has been so welcoming.”

The Sooners also needed help behind the plate. Catcher Wodach had taken over behind the plate early during the championship run of 2016. But there was no true back-up. Hannah Sparks is a soft-spoken, hard-hitting transfer from Thomasville, Alabama. Much like Lowery, there were concerns about fitting in.

“I was worried because I committed, and they won a title,” Sparks said. “In my mind, it was stepping into a big team. But everyone was so welcoming and included me in everything. It made me feel special to be here and experience that and not to be looked at as an outsider.”

The group of youngsters that led the Sooners to a national title in 2016, a core of eight freshman and four sophomores had solid leadership. Erin Miller and Kady Self set the tone for a program that had lost an incredible amount of star power. But after the graduation of Miller and Self, the Sooners had just one senior in 2017.

But coach Gasso had a plan. She noticed something in soft-spoken shortstop Arnold. Beyond her incredibly consistent glove, Gasso noticed how teammates seemed to respond and listen to the Tulsa product and her approach to practice.

“Everything about her is a coach’s dream,” Gasso said. “I have a special place in my heart for Kelsey, with all that she’s been through with her family and to watch her persevere and turn into the woman she is today. She’s given so much to this program and it shows.”

Arnold’s development as a leader involved her stepping out of her comfort zone. She worked hard and studied to learn what it took to become a great leader.

“There are certain qualities that I’ve learned from coach Gasso and from other captains in the past, just staying true to yourself,” Arnold said. “You have to step out of your comfort zone. You have your teammates and coaches behind you all the time. You can’t be afraid to make mistakes.”

The affect that Arnold has had goes beyond the box score and the wins and losses. She has helped to bond a team on and off the field and her teammates have taken notice.

The reality for this senior class is that they have set a high bar. As the Sooners prepare for “May Madness,” no one has been more dialed in than Parker. Through most of April, Parker has been unhittable, and she even had a scoreless streak that stretched into 41 2/3 innings. 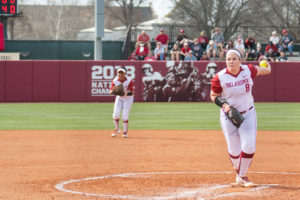 “This year has been really special for me, just knowing that it’s probably the last time I’m going to play,” Parker said. “I just want to go to another level and make every pitch count because I don’t have a ton of them left.”

Not only her teammates but her coaches have noticed the commitment from Parker.

“Seniors can be challenging sometimes,” pitching coach Melyssa Lombardi said. “I think it just depends on where that athlete wants to go, and you can certainly see where Paige Parker wants to go.”

It isn’t just Parker that has stepped up. While Lowery has found another level out of the bullpen, Arnold and Wodach have combined to solidify the bottom of the Sooner line-up. For Wodach, it has been about consistently overcoming. From slumps to injuries, it has all made this team and her better.

Special. There may be no better adjective to describe this Sooner softball senior class. And it is much more than just being special on the field. It is a championship mindset, not only on the field, but off as well. – BSM

Check out the latest episode of Diamond Envy as @Tyler_McComas and @PlankShow run down what the starting lineup on Opening Day could look like for the defending champs.